apparently either one of them.

We got this email from Xero, but in the message content, it's Xerox? 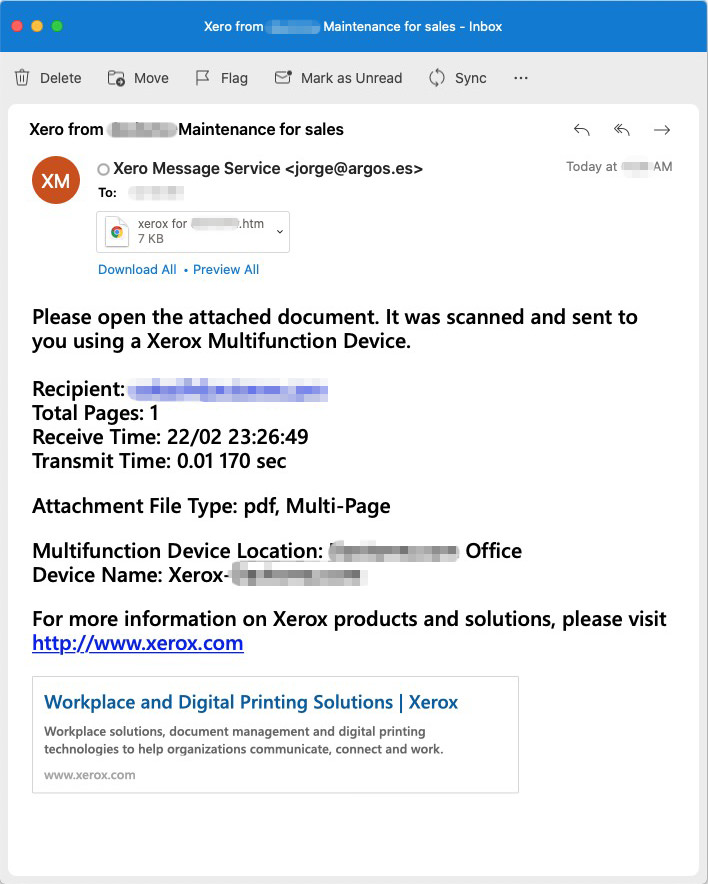 We understand that the mail is sent from llsa987-a17.servidoresdns.net (82.223.190.28), but any reply will go to jorge@argos.es is definitely a phishing/malware case because this email attached a file.

Xero is a cloud-based accounting software platform for small and medium-sized businesses. ... Xero's products are based on the software as a service (SaaS) model and sold by subscription, based on the type and number of company entities managed by the subscriber.

Reports of Xero being target by Cybercriminal. Xero also creates a security noticeboard for their users to read and protect themselves.

Xerox Holdings Corporation is an American corporation that sells print and digital document products and services in more than 160 countries. Xerox is headquartered in Norwalk, Connecticut, though its largest population of employees is based around Rochester, New York, the area in which the company was founded.

Xerox also has reported on phishing/malware incidents from the past.

Argos Limited, trading as Argos, is a catalogue retailer operating in the United Kingdom and Ireland, acquired by Sainsbury's supermarket chain in 2016. It was established in November 1972 and is named after the Greek city of Argos.

Argos, is a catalogue retailer operating in the United Kingdom and Ireland, acquired by Sainsbury's supermarket chain in 2016. It was established in November 1972 and is named after the Greek city of Argos. The company trades both through physical shops and online, with over 883 retail shops, 29 million yearly shop customers, and nearly a billion online visitors per annum, making it one of the largest high street retailers in the United Kingdom. It has also franchised overseas to countries such as China.

In April 1998, GUS plc bought the company and it became part of Home Retail Group when GUS split in October 2006. In August 2013, it was estimated that 96% of the population of the UK was within 10 miles of an Argos branch.

In April 2016, Argos' parent Home Retail Group agreed to a £1.4 billion takeover by the UK supermarket chain Sainsbury's. The acquisition was completed on 2 September 2016 and the business became part of a division named Sainsbury's Argos, led by its own chief executive.

On 5 November 2020, Sainsbury's announced that it would close 420 Argos standalone outlets by March 2024, leaving about 100; 150 Argos outlets were to be opened in supermarkets. The 120 Argos shops that had closed temporarily due to the 2020 COVID-19 pandemic would not reopen. (via Wikipedia)

Keep yourself updated and know how to spot these phishing e-mails. In addition, if you know how to report to prevent others from these dangerous e-mails, by all means, help others by sharing them.

You Take The Red Pill - You Stay In Wonderland...

We're hiring, if you are looking for some challenging work stick around with us - SI Insights : SI Hiring

We too cannot believe they can behaviour like this